What is digital signage?

Digital Signage is the name given to the use of digital media content in advertising and information systems such as electronic billboards, electronic road signs, advertising in shops (in-store marketing), digital door signs or large-format projected images. Digital signage is increasingly being used in public spaces such as train stations, airports and shopping malls.
With its digital signage product kompas, dimedis is one of the leading German suppliers. kompas is used on more than 5,000 players using web technologies and HTML5.

Where to apply Digital Signage? 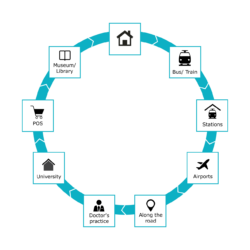 Nowadays, digital signage accompanies us throughout our entire life. We encounter displays and moving images from morning till evening. All spheres of life are shaped by digital signage. The following are the most important applications:


Find out more in our Best Cases!

The success of advertising is determined by measuring visual contacts or the perception of acoustic stimuli. In 2013 Posterselect GmbH carried out a study of the perception and relevance of digital displays in public spaces in conjunction with the Fachverband für Aussenwerbung e.V. This showed that 65% of all respondents were aware of advertising on digital displays and that 56% of all respondents considered this advertising to be informative. Taking the effect of POS advertising into account, these values are even higher: 82% of the respondents noticed digital POS advertising, and 57% of these were stimulated to such an extent that they found the product advertised either interesting or even bought it.
In a separate study Posterselect investigated the perception of advertising depending on where it is installed. It was revealed, for example, that in airports classic advertising surfaces received the most attention (70%) but that large-format posters (61%) and digital advertising (60%) were not far behind. However, taking into account the difference in size between a single digital signage screen and a billboard reveals the true potential of digital advertising.
Digital signage works because human beings still rely on their basic instincts in certain situations and react accordingly. If the eye registers a movement, then one wants know what the cause was. That is, at least, the basic idea. Hence, moving images are well suited for attracting the (reflexive) attention of the beholder. Having won their attention, it is possible to appeal to the beholder (and potential customer) through appealing design and targeted positioning of the content. Combined with flexibly controlled content tailored to suit the target group, this makes digital signage a powerful advertising medium.
Click here to contact us - we have some great ideas to share with you!

Digital signage – the advertising medium of the future?

It is thus absolutely clear that well-placed digital signage receives attention. This results in a range of options and positive effects for the user. In the retail trade, for example, it is possible to increase sales in the long term. In this application the digital signage system is used to inform the customer about special discounts and special offers and thus, as a consequence, to increase turnover.
The same method can be used to establish a brand and to increase the level of brand awareness among the customers. Because the installation and operation of digital signage systems always requires a certain level of investment, third-party advertising is also an interesting business sector. The owner of screens rent them out to third parties, who can then display their own advertising or products. The revenue thus created has a direct impact on ROI (return on investment).
Last but not least, digital signage is still a young technology that will not revolutionize the advertising industry and supersede all other forms of advertising overnight. Nevertheless, due to its extreme flexibility and the target-oriented control of the content, quite a few advantages are already becoming apparent today that make digital signage stand out compared to other advertising media.
Discover new forms of communication and advertising strategies with kompas.