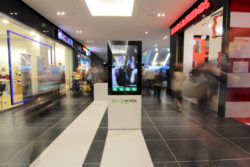 kompas is the Digital Signage software of choice for mfi, a real estate company based in Essen and one of the largest operators of shopping centres in Germany. The proprietor of the Arcaden Shopping chain of malls currently has 210 terminals with a total of 420 screens in use at 17 different locations across the country. The terminals – each of which comes with two large, independently operating touchscreen displays, a printer, a card reader and a camera – have been integrated with already existing coupon systems and are meant to improve communication, engagement and interaction with shoppers as well as strengthen customer loyalty. The rollout for the new kompas system started with a pilot phase in February 2013, with the remaining terminals being installed during the months of April to mid-July. The creative agency responsible for the project is SawatzkiMühlenbruch from Essen, who developed the general concept as well as the content and games running on the displays and who also handle the customer card data.

Florian Zimmermann, Project Manager Digital Signage at mfi: „Digital Signage is becoming more interactive and it's much more that a simple advertising medium. That is why our terminals offer a kiosk mode, where mall-goers can interrupt the regular Digital Signage content by touching the screen to access interactive applications such as wayfinding, a coupon system and games. This interactive content concept was developed by creative agency SawatzkiMühlenbruch from Essen, and together with them, we evaluated a number of system providers during the pilot phase before settling on kompas by dimedis in February. kompas is a very flexible system and has been designed for large networks. The rollout was very quick and the software supports the kiosk mode with its numerous interactive applications very well. It's very easy to include external content within kompas, and the remote maintenance and real-time monitoring capabilities were further reasons for our choice. Using the kompas terminals, we can offer our tenants an attractive channel to engage and retain customers. Visitors benefit from the improved service, entertainment and informational offers.“ 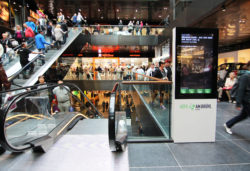 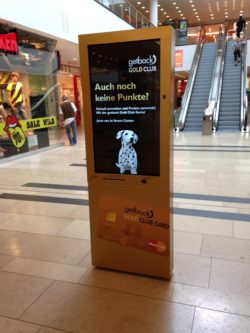 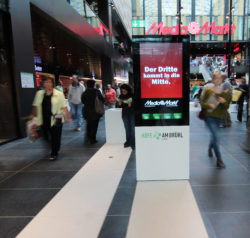