Digital Signage at the POS

snipes, the leading streetwear chain with over 83 stores in Germany, Austria and Switzerland, will be using kompas for its digital instore customer communication. Initially, 20 stores in Germany and all nine stores in Switzerland will be equipped with kompas displays. The content shown on the displays includes advertisements, special offers and Twitter messages and is meant to address the trendy stores' clientele in a direct and modern way. The network administration tools offered by kompas were the main reason for snipes to choose the software made by dimedis. Concept and implementation are being managed by Radio P.O.S., the specialist for instore communication based in Kiel.

Dennis Voth, Head of IT for snipes GmbH, about the project: „snipes sees Digital Signage as an effective and modern way to address our young, tech-savvy target group. In order to be able to manage our large network of stores, together with Radio P.O.S. we have chosen the kompas Digital Signage software by dimedis. We were especially impressed by its ability to manage large, nationwide networks and its powerful rights management.“ 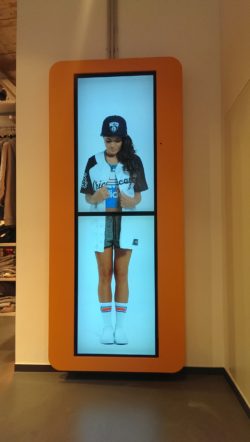