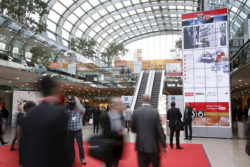 The world's largest free-standing video wall totem has been constructed in Messe Düsseldorf's north entrance hall. With a height of almost seven metres, the installation is a true attention getter and replaces the printed posters that hung in its place before. The design and construction of the video wall, which consists of 24 NEC 46'' screens, was conducted by general contractor InoNet Computer GmbH. The structural integrity of the wall presented quite a challenge; at a height of 6.80m, the stability of the construction had to be absolutely guaranteed. Proper ventilation also came under careful consideration to keep the screens from overheating under constant operation. Driving the installation is a single InoNet Magnius® video wall controller, which is capable of daisy chaining up to 144 screens. The software providing the content for the video wall is kompas, the award-winning Digital Signage software made by dimedis. kompas is in control of everything that can be seen on the screens, such as a site map, Twitter wall, videos and news. Since kompas uses HTML5 to display the content, the video wall practically acts as one of the largest browser windows in the world. It was put into operation on April 7 2014, coinciding with the start of this year's wire and Tube. The video wall will be used for all future trade fairs at Messe Düsseldorf.

Bernhard Wagner, Marketing Director at Messe Düsseldorf, about the project: „We are very proud to be setting a record with our video wall. The aim of the project was to equip the central hub of Messe Düsseldorf with a way to offer visitors orientation and information. The video wall is a much better means to this end than the printed poster walls we used before. Now, we can display dynamic images and up-to-date content such as news and Twitter feeds. We're using the kompas software by dimedis, a solution that has worked for us before. We chose kompas because it makes it easy to schedule and combine static and dynamic content alike using drag and drop.“ 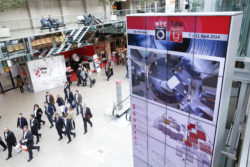 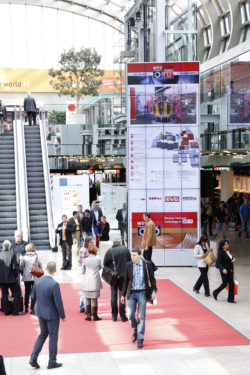 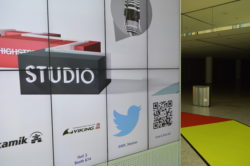